Yahoo's editors are committed to independently selecting wonderful products at great prices for you. We may receive a share from purchases made via links on this page. Pricing and availability are subject to change.
Kris Naudus and Libby Sentz
16 November 2022, 9:58 am·7-min read

Kids love video games, but let’s be honest, we'd all like to see them break away from the screens and play with actual toys that spark imaginative play. Why not compromise with some interactive video game-themed Lego sets that bring one of their favorite games, Super Mario Bros., into the real world? They can have fun building these sets, then use them to reenact their favorite scenes from the games. With enough bells and whistles (and LCD screens) to keep kids engaged, these Lego sets are a great blend of tactile and tech. Even better — several of them are on sale right now, so you can scoop them up in advance of the holiday rush.

To get started, a kid needs, well, a starter pack. This one packs in a few platforms; it comes with Mario, some enemies for him to squish and, of course, a famous warp pipe! The little screen in Mario's chest shows power-ups, and makes the right noise to accompany each action, so it truly feels like playing the game in real life. 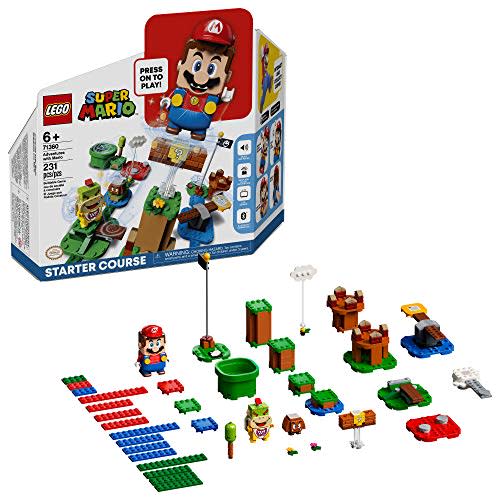 One dad says it's "incredible," "so cool" and he'd "give it more stars if I could." This shopper gave it to their nephew, but "was pleasantly surprised to learn that the figure makes sounds and even the eyes are digitally blinking." This grandparent says it's "well worth the money," and right now you can grab it for only $48, a 20% discount from its usual price of $60.

But what if Mario isn’t a kid’s favorite character? What if they’re a younger sibling and identify more with Mario’s brother Luigi? Well, they can have their very own starter set with the green-clad plumber. This one was released more recently so it’s not always as cheap as the original sets, but fans of games like Luigi’s Mansion will still be thrilled to check it out, especially when it's on sale for $48, down from $60. 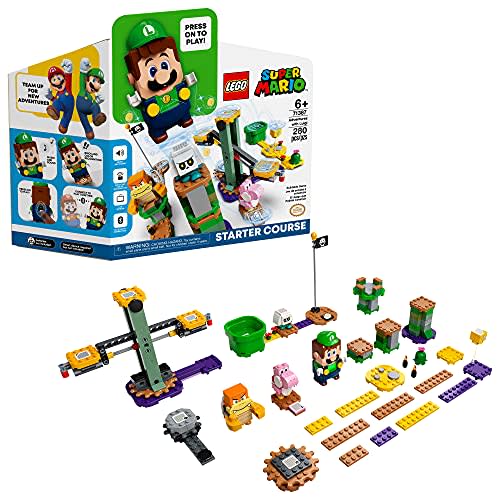 $48$60Save $12
Kids can help the timid yet clever Luigi find his courage again and again as he traverses the course of this 280-piece set. Nearly 6,300 shoppers have given it a perfect five stars.
$48 at Amazon

One parent loved the attention to detail: "Luigi is taller, his eyes are closer together, his mustache and hairline are different shapes and he speaks differently than Mario," while another shopper says it "holds true to the quality and value that [Lego and Nintendo] have always demonstrated," calling it a "home run."

Once a kid has got one — or two — starter sets they’re going to want to expand their little LEGO plumber’s adventures, and they can grab a set like this adorable house that comes with a hammock and Mario’s best friend, Yoshi! It's $24 right now, 20% off from its usual $30 cost.

This shopper loves the set because "it's so cute!" And this parent really enjoyed the app, because "it keeps track of your coins and has your little Lego Mario Land from the sets you have and you can see other people's courses too. Is it an extra step, absolutely, but I feel like Lego made it so you had to get the app so you can get the full Lego Mario experience [...] my son loves it and I'm definitely getting more." 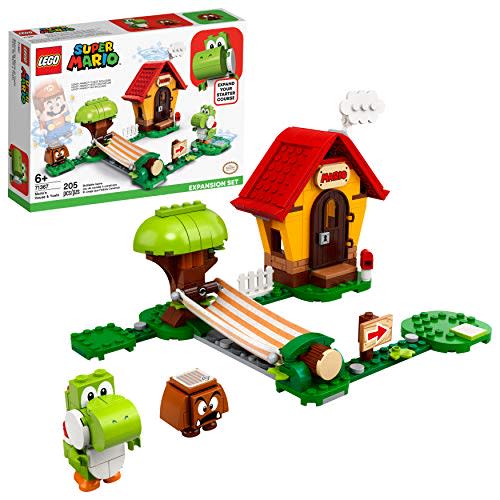 For a slightly more intense Super Mario adventure, you can add the villainous Boomer Bill for Mario and/or Luigi to dodge, along with a mischievous Shy Guy to mix things up a bit!

This uncle bought it "for my nephew to add to his ever expanding Mario Legos that he already owns. This was super easy for him to put together, but fun all the same. This looks great with his current set, and helps him expand his fun and creativity." 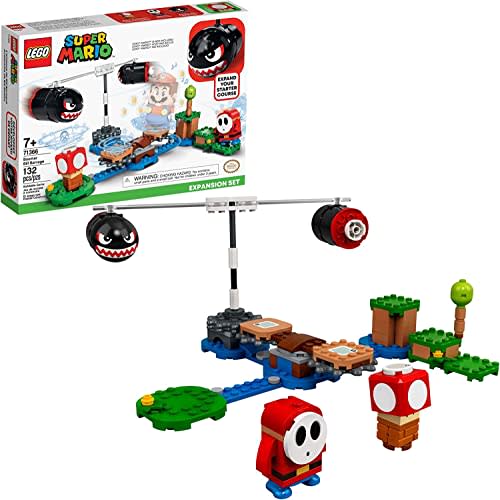 Add a treacherous twist to the adventures of Mario and friends with this 132-piece set, featuring spinning platforms and enemies. This one's not on sale, but what do you expect from villains? Good thing the price is right!
$22 at Amazon

When kids have their head in the clouds, why not meet them there with this Sky World expansion kit, which brings plenty of troublesome enemies into the orbit of our heroic plumber brothers. It will add hours of fun!

It's an "easy set up" according to this grandparent, while this shopper just loves "the mash up of the LEGO universe and the Nintendo world. More please." 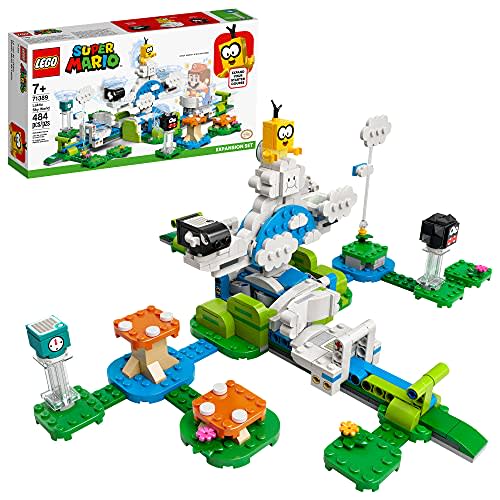 Expand their play all the way up into the clouds with this Sky World set. It'll take a bit longer to build with its whopping 484 pieces, but it'll be worth it.
$32 at Amazon

Even fans of the tough Sumo Bro won’t feel left out, thanks to this tipsy tower set that lets kids take down their mighty foes by having Mario or Luigi jump on the levers — that they build themselves, of course. There’s so much to do with each Mario set, and this particular challenge is well-priced at Lego Super Mario Boss Sumo Bro Topple Tower Expansion Set right now, a 36% discount.

One grandmother who bought it says, "Toys are different these days — there are bar codes to swipe as you play, and apps must be downloaded which this grandma knows nothing about, but thank goodness my son does! His son liked it." 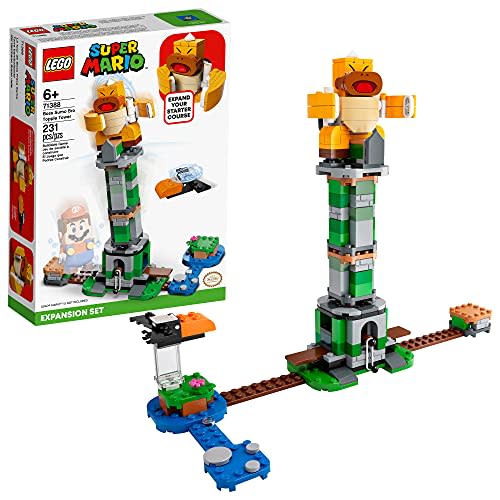 If your kid is ready for a whole new level, it’s time to splurge on this large 366-piece set that lets children design their own adventures for Mario and Luigi. If they’re already fans of games like Super Mario Maker, they’ll love being able to physical snap platforms into place, and you’ll love that they can play with siblings and friends.

This shopper feels it's "awesome if you are a Mario fan. You need a tablet with the app but it directs you on assembly and it's a playable game that you can customize." And one grandparent says their grandson "really enjoys pretending to be in the games with the sets." 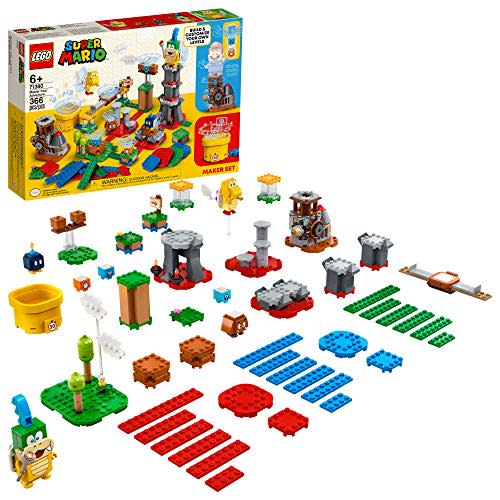 Looking for a few stocking stuffers? You can power-up Mario or Luigi thanks to these affordable costumes that will allow them to gather more coins as they traverse the courses your child has built, as well as adding some extra charming sound effects. Ever wondered what Mario sounds like as a bee? You can find out with this $8 accessory for the basic starter sets!

Kids love it, with this customer's child finding it "'fun to be able to change Mario around." And one grandparent was thrilled: "I absolutely love how these Legos interact with each other. I was amazed how they are like playing the online game. My grandson loves them all." 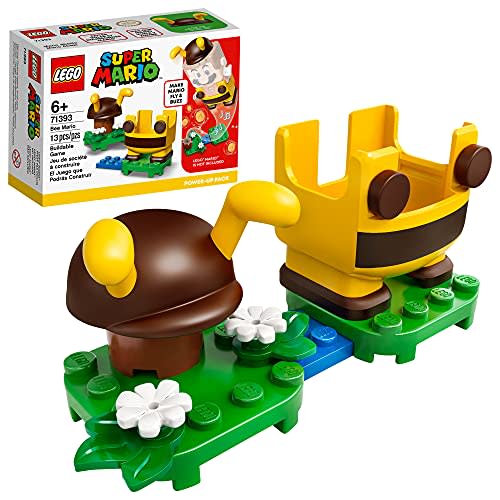 $7$10Save $3
This perfect power suit Mario is the bee's knees. Literally. It's an interactive bee outfit that actually buzzes when Mario wears it and flies around. Grass and flowers included in the little 13-piece set.
$7 at Amazon

One of Mario’s more famous costumes is the tanooki suit — it's basically a raccoon dog, and in the video games the outfit lets Mario fly. This Lego version won’t allow flight, but it does get the plumber a few extra coins as he completes courses, and it’s super cute!

A smart shopper offers this advice: "If you love Super Mario 3, then this suit is a must. [...] This is a great add-on to the Mario collection and of course it doesn’t come with Mario for only $10. Only the $60 starter set does and Mario is grayed out on all other sets to signifying that he doesn’t come with the set. [...] This set is awesome and is a great way to get a lot of coins." 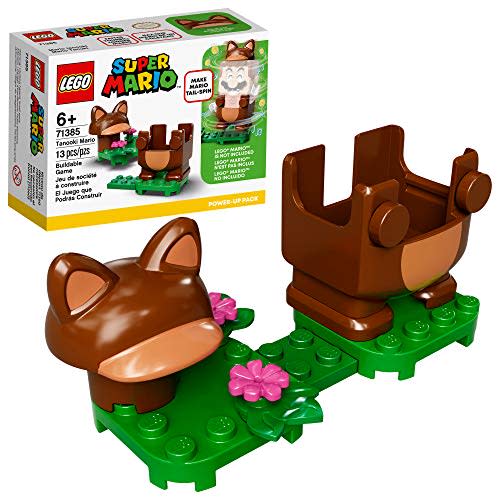 Another 13-piece power-up pack option for their Mario to step into: the adorable Tanooki Mario suit! It elicits unique reactions from Mario when he stomps about and spins.
$15 at Amazon

If your child likes frogs, then this power-up is just their jam! Not only does it offer Mario or Luigi extra coins, but it adds splashing sounds to their jumps. It’s great for kids who like to build water-themed courses, and it even includes a few water and lily pad elements to help them get started. And it's got a 90% approval rating on Amazon — where you can snag it for only $6. 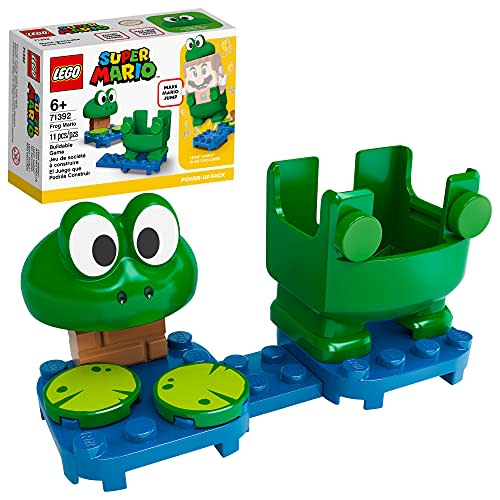 $7$10Save $3
Or maybe Mario wants to impersonate a frog and splash around among the water lilies. Well, he can. It's amazing what just 11 Lego pieces can make. This one's on sale for $6!
$7 at Amazon

Finally, when your child or grandchild is ready for an even bigger challenge, you should pick up this Reznor Knockdown expansion kit that adds a whopping 862 pieces to their existing Super Mario LEGO setup. It adds more characters like a blue Toad and two frightening rhino-like enemies for the plumber to avoid.

It may seem daunting, but one grandparent bought it for their six-year grandson, who "built this on his own" for his birthday. And it’s only $56, a 20% discount from its usual high price of $70. 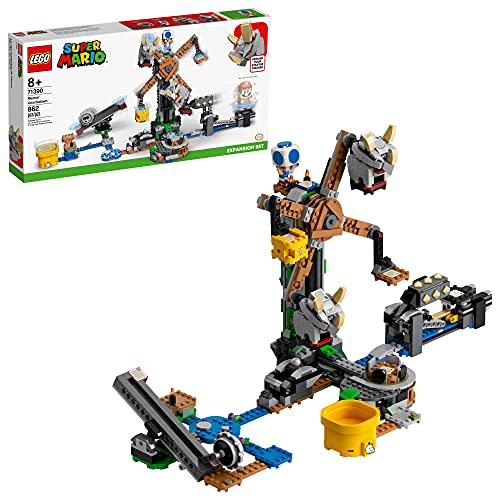 $48$70Save $22
The ultimate expansion, though, is this huge and exciting 862-piece spinning, rotating, seesawing course. Includes Blue Toad, 2 Reznors and Grrrol, and it's on sale now! Ages 8+ recommended.
$48 at Amazon

If you have Amazon Prime, you’ll get free shipping, of course. Not yet a member? No problem. You can sign up for your free 30-day trial here. (And by the way, those without Prime still get free shipping on orders of $25 or more.)

Looking for more great Amazon home and auto deals? Check these out: