Yahoo's editors are committed to independently selecting wonderful products at great prices for you. We may receive a share from purchases made via links on this page. Pricing and availability are subject to change.
Rick Broida
24 November 2022, 8:57 am·8-min read

Dreaming of your own home theater? I get it: Big screen, 4K projector, weekend movie marathons... Just add popcorn and you'll have the perfect monoplex right in your living room. 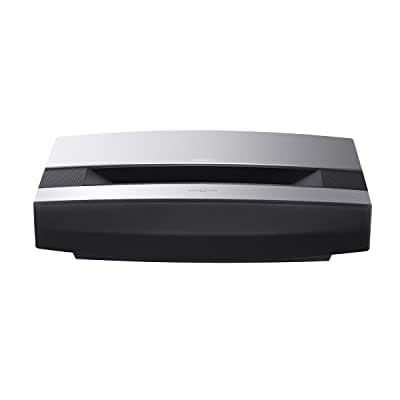 $2,239$2,499Save $260
Park this next to a wall and you've got nearly everything you need for a complete big-screen home theater. It's not perfect, but the simple setup and dazzling display make up for most hiccups. Clip the on-page coupon to get the discounted price.
$2,239 at Amazon

Ah, but the projector part is the challenge, right? Typically you need to buy and install a ceiling mount, then fish wires through drywall so you can connect to power and link up with a some kind of speaker system. Expensive, complicated... hard pass.

Thank goodness for ultra-short-throw (UST) projectors, which you park right next to a wall to enjoy up to 120 inches of home-theater goodness. I've tested several such projectors, including the Bomaker Polaris and Vava 4K, and found them all great in some respects in lacking in others. So how does the Xgimi Aura compare?

On paper, it's quite similar, serving up an HDR10-enhanced 4K picture, built-in audio courtesy of Harman Kardon and a very respectable 2,400 ANSI lumens (the measure of projector brightness). But in one key way, the Aura appears to beat the aforementioned competitors: It comes with Android TV 10.0 built in. This Google-powered operating system makes out-of-box streaming a breeze (mostly).

However, it does have its shortcomings, to say nothing of a fairly hefty price tag: $2,799, though for Black Friday and Cyber Monday it's on sale for $2,239. (Make sure to click the Extra Savings option as well, as you'll also get a free Xgimi Streaming Dongle when you add it to the cart with the projector.) That's a sizable investment, which begs a question: Would you be better off with a big TV?

Not long ago, "home theater" was synonymous with "projector." You couldn't have one without the other. Today, massive TVs have increasingly not-so-massive prices. Witness some of the deals leading up to Black Friday, including this LG 86-inch TV that was on sale for under $1,000 (until it sold out). You can find others in the $1,200 range.

That's roughly half the price of this projector, and don't forget the wall screen you'll likely need to purchase. (You might be able to get away with projecting on a white or light-gray wall, but if it's not perfectly smooth and flat, you probably won't be happy with the resulting image.)

Granted, 86 inches isn't as large as 100 inches (and you'd need a pretty massive wall to accommodate anything larger), but it's pretty darn big. And a TV will definitely deliver a brighter picture, especially when there's ambient light in the room. Much as I love the idea of a projector-based theater, I'm starting to think the TV option makes more sense. It's cheaper, brighter and only a little bit smaller.

That said, if you have a darkened room earmarked for this and a really big wall to fill, a UST can still be a great option. Let's dive into the pros and cons of the Xgimi Aura.

This is a really pretty projector, modeled in silver and black with a remote to match. Its laser-based tech promises up to 25,000 hours of life, far better than what you can get from any lamp projector. Xgimi recommends pairing it with an ambient light rejection (ALR) screen, and these can get expensive; this 100-inch ALR screen sells for $500.

Setup is relatively simple, thanks in part to a clearly written printed instruction guide. The projector itself has four adjustable feet so you can make minor leveling tweaks, but also offers 4- and 8-point digital keystone correction. That allows you to make further adjustments to the image (using the remote) so it properly fits your wall or screen. There's no zoom here, though, digital or otherwise, so you may have to scoot the projector closer to or farther from the wall to get your desired image size. Thankfully, auto-focus kicks in as you make any such changes.

From there it's just a matter of powering on and following the Android TV setup prompts. If you've ever owned an actual TV with the Android interface, or you just own an Android phone, you'll feel right at home.

The projector includes three HDMI inputs for external devices like a cable box and game console. However, although one of them has ARC support for use with a soundbar, it doesn't support eARC — something to consider if you want Dolby Atmos in your audio mix. (ARC alone can't send lossless Atmos signals.)

Xgimi Aura: How it looks, how it sounds

Like the vast majority of projectors, the Aura works best in a darkened room. It doesn't need pitch black, but if your space is well-lit or near a window, you're likely to find the image pretty washed-out. You can see the Android TV menu well enough with the lights on, but a show like House of the Dragon, which includes a lot of dark scenes, is barely visible.

When things get dim, however, the Aura produces reasonably bright, razor-sharp video, the kind that can really stop you in your tracks (or, more likely, keep you on the couch). In my tests, images looked beautiful overall, though some colors "popped" more than others. Indeed, I was hoping for a bit more brightness and contrast, but I will note that because my projection screen wasn't of the ALR variety, I might not have been getting the best possible results. What's more, I had to apply a fair amount of keystone adjustment to make the image fit my screen, and that can have an impact on brightness as well.

Xgimi's built-in Harman Kardon speakers are pretty decent given that they're built into the projector, but I suspect you'll want a bigger sound system to accompany your big screen. In my modestly sized basement space, I found I had to crank the volume pretty high at times to get a more movie-like audio experience. Something like this really begs to be paired with a surround system like the Polk Audio MagniFi Max AX SR or Samsung HW-Q990B/ZA.

Xgimi Aura: Not a perfect projector

I'll admit to being a little disappointed with the Aura's remote, which isn't backlit and lacks dedicated play/pause and skip buttons. You can use the directional pad and center select button for these functions, but these seem unintuitive compared to what you find on most remotes.

In addition, although the remote has a Google voice-search button that's great for things like finding apps and shows, it's slow to respond. In my tests, I'd press the button and have to wait several seconds before voice-recognition would kick in.

Another gripe: The remote has no button for switching inputs. Instead, you have to navigate to the Android TV interface to find the input icon (which, if you don't know what to look for, isn't exactly obvious). Even more annoying, the projector doesn't retain the selected input from one viewing session to the next. If you were previously connected to, say, your game console, you'll have to manually choose that input again the next time. That's an annoying hassle (though easily corrected with a firmware update if Xgimi chooses to do so).

There are surprisingly few image controls. The four presets (movie, football, game and office) can't be modified at all, and the Custom option is fairly limited in what it allows you to adjust. Unfortunately, it's also the only mode that lets you disable motion-smoothing, which creates the dreaded soap-opera effect. That's fine for games and football, but terrible for movie mode.

Finally, there's one glaring problem with this implementation of Android, and that's Netflix: It simply doesn't work, despite appearing on a list of available apps you can install during setup. That owes to some kind of licensing restriction, one that plagues a lot of projectors, but it's a fairly major annoyance for anyone who wants to use the service. One hopeful workaround would be to use the built-in Chromecast option to stream Netflix from your phone or tablet, but that returns the same "device not supported" error.

The only workaround that actually works is to plug in some kind of streaming device, be it Apple TV, Fire TV, Roku or the free Xgimi Streaming Dongle mentioned above. If you're planning to use a game console, that would work as well.

Xgimi Aura: Should you buy it?

Much as I love the idea of the Xgimi Aura, I'm not wild about the execution. Although I'm sure any movie enthusiast would relish the giant theater experience it affords, a super-big TV might offer a better one overall: brighter, more colorful image; more controls over that image; a working Netflix implementation and so on. And it would probably cost less as well.

Indeed, we may be moving past the age of the projector and the thinking that a proper home theater requires one. Still, if you have your heart set on something like this, the current sale represents a considerable savings.

$2,239$2,499Save $260
Park this next to a wall and you've got nearly everything you need for a complete big-screen home theater. It's not perfect, but the simple setup and dazzling display make up for most hiccups. Clip the on-page coupon to get the discounted price.
$2,239 at Amazon

Looking for more great Amazon tech deals? Check these out: